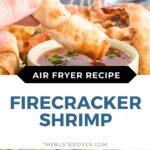 Plump, juicy shrimp are marinated in a spicy sauce and wrapped in a crispy egg roll wrapper. Cooked in the air fryer, these shrimp are surprisingly quick and easy. These firecracker shrimp make a great addition to any appetizer platter.

This post may contain affiliate links. As an Amazon Associate I earn from qualifying purchases.

What are Firecracker Shrimp

Firecracker shrimp are shrimp that have been seasoned with a spicy sauce or marinade coated with some sort of breading or wrapped in a shell and fried until crispy.

For these firecracker shrimp we are using the air fryer and we are wrapping them in egg roll wrappers.

After we marinade the shrimp in a spicy marinade of soy sauce, sriracha and sesame oil, then we wrap them in an egg roll wrapper.

When they are air fried the wrapper becomes bubbly and crispy and the shrimp remains plump and juicy.

Served with a dipping sauce these are the perfect little appetizer.

Why We Love This Recipe

It is quick – This is a quick recipe to whip up. After marinating the shrimp it should only take about 15 minutes to prepare them and another 10 minutes to cook.

It’s easy – These shrimp may look fancy, but they are actually pretty simple to make. You don’t need to know any fancy technique, you are just going to roll them up and toss them in the air fryer.

To make these firecracker shrimp you will need:

Begin by mixing the soy sauce, sriracha sauce and sesame oil in a small bowl.

Prepare the shrimp by rinsing and blotting dry on a paper towel.

Then, with a sharp knife, make several shallow cuts in the inside curve of the tail. This will help straighten the shrimp for wrapping.

After you have prepared the shrimp place them in a bowl, add the marinade and toss to coat. Let the shrimp marinate for 15-20 minutes.

Next, prepare the egg roll wrappers by cutting them in half diagonally.

The wrappers I used for this recipe were small wrappers, about 4×4 inches in size, but you can use larger ones if that is all you can find.

Pro Tip – If you can’t find egg roll wrappers you can use wonton wrappers instead. You will not need to cut them in half. Instead, cut about an inch off of one corner and place the tail end of the shrimp on the cut edge. Then proceed to wrap as described below.

After allowing the shrimp to marinade it is time to wrap them.

Two – Starting from the side closest to you, wrap the end of the egg roll wrapper over the shrimp once.

Three – Fold the tip of the egg roll wrapper over the end of the shrimp.

Four – Continue rolling the wrapper until the shrimp is fully wrapped. If the end of the wrapper will not stay in place you can add a dab of water to help it stick.

Place the shrimp in a single layer in the air fryer basket and spray or brush the tops with a bit of oil.

Set the air fryer to 350°F and cook the shrimp for 8-10 minutes until golden and crisp.

Pro Tip – Don’t skip the oil in this recipe. The tiny amount of oil used is what will help the egg roll wrappers achieve that bubbly, crispy texture.

These firecracker shrimp make a great addition to an appetizer plater, or you can make just a few for an easy and delicious snack.

We like to serve them alongside a dipping sauce like sweet Thai chili sauce or tangy ponzu sauce.

If you want these shrimp as part of your main meal they go great with a simple salad.

Or if you like to make sushi at home these are a great addition to the table in place of the crispy torpedo shrimp you would normally get in a restaurant.

Can I make firecracker shrimp ahead of time?

If you want to make these shrimp ahead of time to speed things up when it’s time to serve that’s no problem. Once the shrimp are wrapped simply store them on a parchment lined baking sheet and cover and place in the refrigerator until you are ready to cook.

How should I reheat firecracker shrimp?

You can reheat these in the air fryer. Set the air fryer to 350°F and cook for 3-4 minutes until they are heated through. 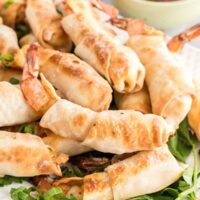 Wonton wrappers can be used if you can’t find egg roll wrappers.  Cut about 1 inch off of one corner and place the tail end of the shrimp on the cut end.  Then continue to wrap as directed. The egg roll wrappers I used for this recipe were approximately 4×4 inches, but you can use slightly larger wrappers if that is all you can find. Don’t skip the oil in this recipe.  You only need a small amount.  The oil is what will give the egg roll wrappers the bubbly, crispy texture.

Nutritional information is based on third-party calculations and should be considered estimates. Actual nutritional content will vary with brands used, measuring methods, portion sizes and more.

We just had them tonight!! Delish

Thank you! So glad you liked them!

Oh yum!!! This turned out amazing and my husband is already asking me to make it again!

So glad you enjoyed them as much as we do!

This sounds amazing and I can't wait to make it! Love all of the tips to make sure I'm doing it perfectly, too! 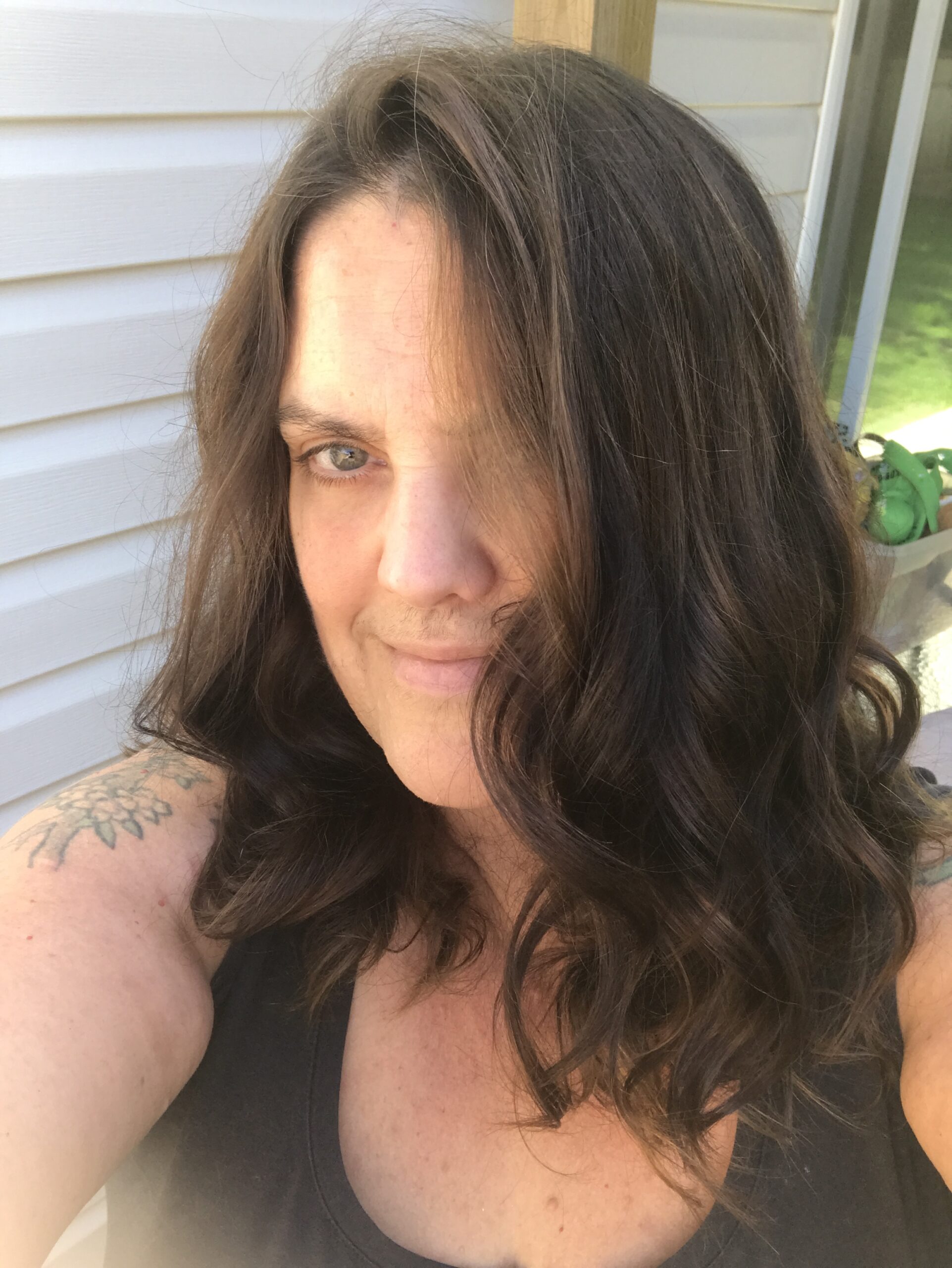 Welcome to The Busted Oven. I’m so glad you’ve found me.

My goal with The Busted Oven is to bring you easy recipes with simple ingredients and straight forward instructions.

Learn more about me →